The ACCC makes 56 individual recommendations, the most notable of which are:

The remainder of this update analyses the broad themes in the ACCC’s report, takes a closer look at the ACCC’s claims of savings achievable if its recommendations are adopted and provides some additional commentary on each of the main three areas of the market in which the ACCC made recommendations.

Broad themes in the ACCC’s report

We consider that there are a number of broader themes in the ACCC’s report which are worth highlighting, specifically that the ACCC:

In some cases, the ACCC re-visits old themes and concerns, although at times this feels more driven by historic policy views than any new or compelling evidence.  For example, the report criticises generation in the NEM as being “highly concentrated” – although this claim is not borne out by its own data, either in terms of capacity or dispatched NEM generation.  In fact, based on the concentration measure most commonly applied by the ACCC in its merger guidelines (the Herfindahl-Hirschman Index or HHI), NEM regions come in around, or even slightly below, the HHI threshold typically needed to trigger any concern.

Despite this, the ACCC relies upon this concern to justify recommendations that:

Moreover, the report fails to demonstrate that concentration or bidding behaviour are causing increases in wholesale pricing.  To the contrary, the ACCC report acknowledges that increasing wholesale prices are due to well-known dynamics such as the shift in generation mix across the NEM over the past five years.  Low-cost brown coal generators are the marginal (price-setting) generator in the market significantly less frequently, a role being performed more often by higher cost black coal, gas and hydro generators.  This change has been primarily driven by the exit of two large brown-coal power stations – Northern and Hazelwood.

This trend has been coupled with an increase in the price of gas (arising from  increased demand for gas given the development of export facilities on the east coast) and black coal (arising from the expiry of some long-term contracts that were set significantly lower than current export parity prices).

There is a strong flavour throughout the report that different groups of consumers are experiencing higher electricity prices in different ways.  The ACCC is clearly sensitive that the electricity pricing debate is not only about questions of competition and efficiency – but is being driven by distributional and social equity concerns.

In this regard, the ACCC explicitly recommends that consumer protection regulation in this area should embody a range of new principles including requirements to “reduce the risk of inequity in outcome between consumers in the retail market” (recommendation 47).  The ACCC recognises that flattening consumer outcomes in this way could mean that “some of the lowest offers available now will no longer be accessible, and consumers who seek out those offers may end up paying more for electricity” – an outcome it justifies on the basis that consumers currently benefiting from the very low offers “may be doing so at the expense of other consumers who are paying too much” (page 144).

It is commonplace for products throughout the economy to be sold to different customers at significantly different prices, whether because some customers take advantage of time-limited discounts while others do not or as a result of individual negotiation off the ‘sticker’ price.   The ACCC does not make a strong case for why differences in consumer prices, of themselves, are unhealthy or undesirable

Interestingly, in other sectors where this has been a concern, the ACCC’s approach has been to focus on improved customer information and transparency measures – in order to improve levels of switching and competition.  However, the ACCC report in this case places less emphasis on consumer information and calls instead for more direct intervention into the market – including through the AER fixing a default retail price “as a fallback position for the disengaged” consumer (page 249).

The ACCC goes to pains to seek to distinguish the new ‘default offer’ from the ‘basic service offer’ or “BSO” that had been called for in August 2017 by the Thwaites Review of Electricity and Gas Markets in Victoria.  In essence, though, the primary difference is that the ACCC default offer is more generous (allowing retailers to also recover customer acquisition costs) in order that it not be the lowest price in the market and so that there is still an incentive for both consumers and retailers to develop innovative and competitive pricing alternatives.

We have previously been critical of the multiple, overlapping and fragmented regulatory bodies that operate in the energy sector.  If accepted, elements of the ACCC report would make this worse.

By our count, 23 of the 56 recommendations that the ACCC have made in its final report would result in more powers being given to the ACCC or the AER (which shares staff, resources and facilities with the ACCC), or for existing powers of the AER to be expanded or strengthened.  Many of these recommendations involve ongoing roles for the ACCC or AER in overseeing or regulating aspects of the electricity market, including:

It is also possible that the ACCC or AER would be the body tasked with administering the suggested NEM-wide retail price monitoring (recommendation 40), which the ACCC suggests should be modelled on the way data was collected during its electricity inquiry.

Even if only a proportion of these recommendations are adopted, it is likely that the ACCC / AER will be tasked with substantial additional ongoing functions in the electricity sector.  A similar trend was observed following the ACCC’s 2015/16 gas inquiry which, among other things, recommended increased regulation of gas pipelines, a task ultimately performed by the AER, and additional transparency of gas market prices, which likely formed the impetus for the ACCC’s ongoing 2017-2020 gas inquiry.

In our analysis of the 2017 Finkel report, we observed that the report made concrete proposals to deal with system security in generation, but was less focused on the critical issues arising from the longer term disruption that is occurring in the electricity grid.  In particular, we observed that the Finkel report did not deal with smart meters and failed to directly address the issue of network price signals and tariffs.

These are important issues that directly underpin the efficiency and cost-effectiveness of electricity supply. The ENA / CSIRO estimate in their Electricity Network Transformation Roadmap that almost $1 trillion of investment will be made in the electricity system in Australia by 2050 and that more effective investment – which is critically underpinned by cost-reflective investment signals – could result in cumulative total savings of over $100 billion by 2050.

It is positive therefore that the ACCC report places emphasis on these issues.  It recommends that governments should agree to mandatory assignment of cost-reflective network pricing on retailers, ending existing opt-in and opt-out arrangements (recommendation 14).  It recognises that the benefits of these reforms can only be realised in conjunction with smart meters, and so the report also recommends steps to support their take-up (recommendation 15).

Whether these reforms go far enough to support the types of long-term network planning envisaged in the Electricity Network Transformation Roadmap remains to be seen, but there is no doubt that motivating smart meter deployment and increased cost-reflective network pricing would be a strong step in the right direction.

However, the immediate implementation of cost-reflective pricing could lead to bill shock, and so the ACCC is careful to include a recommendation for legislation to ensure transitional assistance is provided for residential and small business customers.

Recommendations to lower network costs – including a call for asset writedowns

It is worth noting that the ACCC gives recognition to particular State-based reasons for the observed increases in network costs – for example, the smart meter rollout in Victoria, onerous network reliability standards which were introduced in NSW and Queensland in 2005, and the big, lumpy nature of investments in transmission networks.  The ACCC nonetheless recommends significant reform of the regulatory framework, to address what it sees as past policy mis-steps.

The ACCC has recommended specific action from governments, as outlined below.

The ACCC has recommended voluntary government write-downs of existing RABs of Government-owned networks in NSW, Queensland and Tasmania.  To calculate the value of the write-downs, the ACCC favours the adoption of estimates of overinvestment derived by the Grattan Institute in a report published in March 2018. It is worth noting that the Grattan Institute report adopted a broad ‘top down’ approach rather than a granular ‘bottom-up’ assessment of the utilisation of particular network assets.  As the ACCC acknowledges, the Grattan Institute report did not attempt to identify specific network assets that could be considered excess to requirements, or ‘stranded’.

If the Grattan Institute estimates of “excess” RAB growth were to be used as a basis for asset writedowns, there would be reductions in network revenues of between 10% and 30% for Government-owned networks in NSW, Queensland and Tasmania.

In NSW, where assets have recently been either fully or partially privatised, the ACCC has recommended that network overspending be recouped by way of rebates on network charges (paid to the distribution company to be passed on to consumers) to offset the impact of over-investment by in NSW (Recommendation 11).

The ACCC has also recommended that the current regulatory regime be reformed to more explicitly deal with the potential for asset stranding on an ongoing basis.  The ACCC considers three options for reform:

The ACCC appears to favour the second of these options, and recommends introduction of new rules to this effect.

Lowering the impact of environmental costs on electricity bills

There are currently in place several environmental schemes which promote cleaner sources of energy or encouraging the take-up of energy efficient devices.  Some of these include the national small-scale renewable energy scheme (SRES) and state-based solar FiT schemes, which the ACCC considers have resulted in overly generous FiT payments to owners of rooftop solar PV systems.

To address this, the ACCC has recommended that any costs remaining from premium solar feed-in schemes should be borne by state governments through their budgets rather than being recovered through charges to electricity users.

One of the headline claims in the ACCC’s report is that significant savings in the average customer bill are achievable by 2020-21 “if the ACCC’s recommendations are adopted”.  The ACCC calculates these achievable savings for each NEM region, highlighting the effect on customer bills in NSW in the following graph: 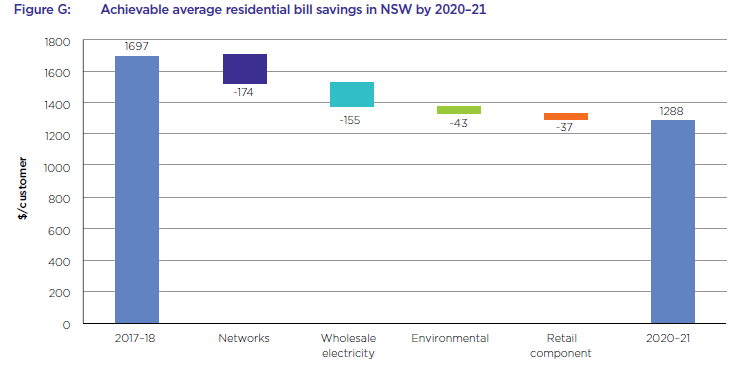 It is interesting to analyse savings calculated in the above diagram in detail:

In total, 54% of these savings arise from additional government expenditures which, in effect, shift costs which are currently borne by electricity users directly onto taxpayers more generally.  While these measures would result in lower electricity bills, the ACCC does not analyse the economic efficiency or broader social implications of this form of cost shifting.

A further 33% of these savings arise from forecast changes in wholesale market conditions or AER decisions that are entirely independent of the recommendations in the ACCC’s report.

Of the remainder, 9% is assumed to result from the calculated reduction in retail prices linked to introduction of the non-binding ‘default offer’ while 4% is a direct saving that comes from ending the costs associated with fulfilling an existing renewable energy subsidy.

One thing is clear – this final report will not be the end of the story.  The recommendations now need to be considered by the COAG Energy Council, which will hold at least one more meeting before the end of 2018.

Any change to the rules of the NEM require the unanimous approval of all affected governments.  The slow progress of the NEG through COAG – which was announced in October 2017 and has not yet been accepted – shows that major reforms of the electricity system do not move quickly.

Article
Between uncontrolled jungle and lacklustre patch: How to cultivate a
Expertise Area