The Australian Government has targeted the use of Managed Investment Trusts (MITs) by foreign investors in a reversal of original policy objectives to the introduction of MITs, while couching the proposed package in terms of levelling the playing field.

Unhelpfully and reflective of the muddle that is the Government’s approach to tax, despite the package being titled “Stapled Structures – Details of Integrity Package”, the package is neither limited to stapled structures nor detailed. There is a significant level of important detail missing, including how the package will practically apply and how domestic investors will be protected.

Who does the package affect

The Government’s package released on 27 March 2018 has broad ranging application, despite being couched in relatively narrow terms. It will affect investors including:

The lack of detail and consistency in the description of the changes makes it difficult to assess exactly who the measures will apply to. Investors with any interest in a trust and foreign pension funds and soverign wealth funds must keep a keen eye out for more details, some of which may well come in the upcoming Federal Budget.

What seems to be clear, though, is that traditional real estate trusts with stapled structures and no (or immaterial) cross charges are unaffected.

The measures in detail 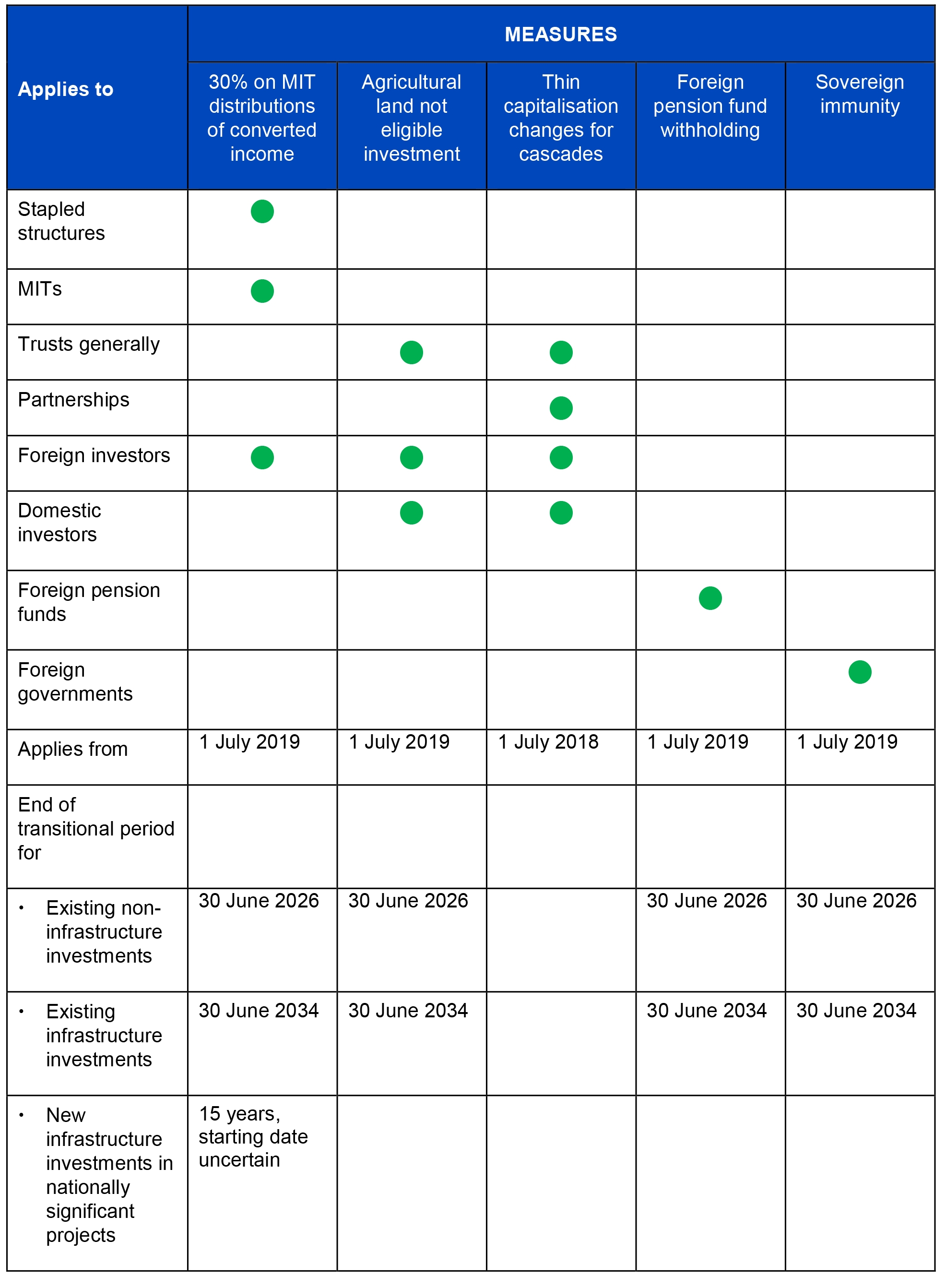 1. Foreign investors in stapled MITs will have tax withheld at 30% (rather than 15%) for “converted” income.

The proposed measures will impose 30% tax (as opposed to the current 15%) on distributions to foreign investors by a MIT in a stapled structure that are “derived” from converted income, being:

Where the converted income is an unspecified small proportion (presumably, 5% or thereabouts) of the gross income of the MIT, the 30% rate will not apply.

Foreign investors in nationally significant infrastructure projects will be given a 15 year exemption from the 30% rate. However, at the end of the exemption period, the 30% rate will apply. How projects will be determined to be nationally significant has not been specified, but one would assume some form of approval process will need to be adopted. Further consultation is expected.

2. Agricultural land will no longer be an eligible investment business.

Foreign investors (through MITs) enjoy a competitive advantage over domestic investors in agricultural land, specifically where that land is used to derive rent (as opposed to operate a farm or orchard).

It will convert the trust distributions into franked dividends in the hands of all investors provided all of the conditions for franking are met. Foreign investors will not pay any withholding tax on the distributions, while Australian investors may pay top up tax or get a refund of excess franking credits (assuming there are no changes to the franking credit rules).

3. The thin capitalisation associate entity test will be lowered from 50% or more to 10% or more.

This measure is designed to prevent the multiple gearing of transparent entity structures (that is, those with trusts and partnerships). It is possible to gear cascaded trusts and partnerships at each tier where, broadly, each tier does not control 50% or more of other parts of the tier. Under the measure, the relationship threshold will be lowered to just 10% or more. There is also a consequential change to the arm’s length test, requiring testing against the ultimate underlying property.

At 10%, it is almost impossible to compel the underlying entity to provide an investor with the financial and tax information necessary to be able to undertake thin capitalisation calculations properly, meaning there is either no gearing at the interposed entities or, more likely, the thin capitalisation rules are applied conservatively with greater interest deductions denied than would otherwise have been the case.

This measure will operate with regard to the purpose behind the cascading of transparent entities, which means investors with legitimate reasons for the cascaded trusts and partnerships will suffer.

The tit for tat measures

4. Foreign pension funds with non-portfolio investments will be subject to withholding tax.

Foreign pension funds can continue investing through MITs and obtain the 15% rate. However, with the converted income measure, investment in infrastructure assets through MITs may become more difficult given the significant land component of some projects.

It is unclear how the exemption from interest withholding tax will interact with the portfolio-like test. If a foreign pension fund was to only lend money (even where it is able to exercise influence in other ways), it will presumably be able to obtain the exemption, opening up planning opportunities.

5. Sovereign investors with non-portfolio investments will be subject to withholding tax.

There has traditionally been an internationally recognised principle of sovereign immunity, that prevents one sovereign taxing another (kind of like the business world’s version of diplomatic immunity). The immunity is applied to passive and minority investments, but has never been legislated.

This measure will create a legislative framework for the sovereign immunity exemption and limit the exemption from taxes to foreign government investors with portfolio-like interests (again, with no influence). The exemption will not apply to distributions of active business income, including distributions through trusts and converted income.

All elements (except the thin capitalisation measures) will commence on 1 July 2019. A transitional period of 7 years for stapled structures and 15 years for infrastructure assets will apply for investments in existence on 27 March 2018.

The thin capitalisation element will apply to income years on or after 1 July 2018 (with no transitional period).

There was expectation that the stapled trust measures, when announced, would also legislate on the control issues that plague the funds management industry, including in private equity and venture capital. That hope has been dashed, with no mention of control issues. This leaves the private equity and venture capital industries taking positions on Tax Office guidance that is, in many respects, controversial and not consistent with global industry practices. But that says more about our archaic trust tax laws (yet another lost opportunity for Government) than it does about the Tax Office’s interpretation of those laws.

There are a vast array of non-MIT stapled structures used in the Australian landscape which achieve tax effective outcomes, as alluded to previously. It is interesting that the Government has not targeted these structures, but perhaps this will come in time.

What should fund managers do?

Fund managers with a stapled structure already in place should have 7 years (or 15 years for an infrastructure fund) under the transitional rules do not need to take active steps to change the structures.  Many funds will cease within these transitional periods.  Those that remain in existence beyond those periods may simply choose to bear the additional tax for particular income and particular classes of investors.

However, new funds should consider their use of MITs and staple structures. MITs will still likely be the fund vehicle of choice, as funds should generally not be worse off than other vehicle choices. However, the new law will limit the tax benefits of forming a staple vehicle for the pure sake of tax – a policy win for the Government.

Managers should also review their investor list and check whether any pension or sovereign funds will be affected.