The Guideline makes clear that decommissioning activities are the responsibility of a petroleum titleholder[3] and, as such, titleholders should be aware of their obligations under the OPGGSA and other applicable laws so that it may undertake adequate and timely planning for decommissioning activities during the life of a petroleum project (including in the early stages of project development and as part of overall field development plans), and not just at the end of petroleum operations.

Under the OPGGSA, the core decommissioning obligation of a titleholder is the complete removal of infrastructure used in petroleum operations and the plugging and abandonment of wells at the end of the life of a project. However, the National Offshore Petroleum Safety and Environmental Management Authority (NOPSEMA) may accept an approach other than complete removal of equipment and property if a titleholder can demonstrate through an environmental plan (EP) that alternative arrangements that reduce environmental impacts and risks to both acceptable levels and as low as reasonably practicable. Such alternative approach must also meet all other applicable legislative and regulatory requirements.

Titleholders also have ongoing decommissioning obligations under the OPGGSA, associated regulations and any directions given by NOPSEMA or the responsible Commonwealth Minister. These include:

This means that disused infrastructure should be removed at appropriate points throughout the life of a project as well as at the end of a project.

All decommissioning activities must be undertaken while a title is still in force. The surrender of a title will only be approved by the Joint Authority if the titleholder has reasonably satisfied NOPSEMA that it has met certain criteria which, relevantly, include the following:[6]

Under the OPGGSA, NOPSEMA may issue a direction to current or former titleholders on matters relating to, among other things, the maintaining in good condition and repair of all structures, equipment and other property used in connection with petroleum exploration, and the removal from an offshore area of structures, equipment and other property brought into an offshore area for petroleum exploration that are no longer used for those purposes.[8] The responsible Commonwealth Minister may issue similar directions, however any ministerial direction must relate to resource management, resource security or data management.[9]

Importantly, NOPSEMA may also issue remedial directions to current and former titleholders to do any or all of the following:

The responsible Commonwealth Minister may issue similar directions to current and former titleholders, however any ministerial direction cannot relate to the removal of, or making of arrangements in relation to, property.[10]

The Guideline does not clarify who is considered to be a ‘former’ titleholder or the circumstances in which a former titleholder (as opposed to a current titleholder) would be issued a direction by NOPSEMA or the Commonwealth Minister. Our view is that the OPGGSA only captures the immediate past titleholder and not any of its predecessors in title.

The diagram below provides a high level overview of the approvals a titleholder is required to obtain at each stage of a petroleum project. 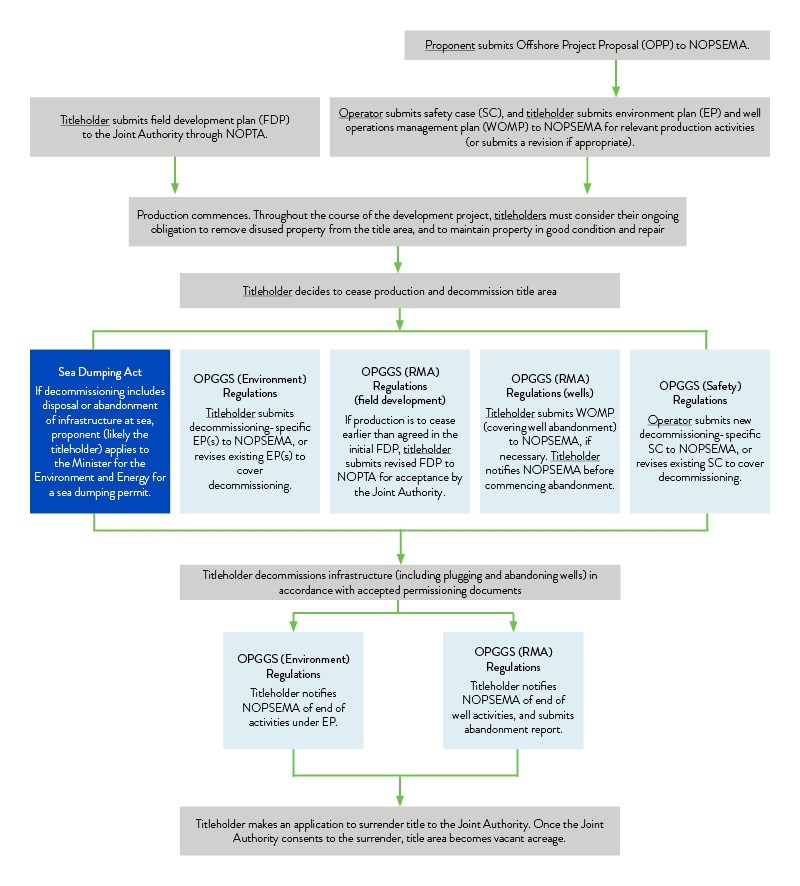 Decommissioning activities in Commonwealth waters require a titleholder to obtain certain approvals relevant to different stages of a project, including:

If a titleholder proposes to transfer an interest in a petroleum title, the National Offshore Petroleum Titles Administrator (NOPTA) will assess whether the transferee has the technical and financial capacity to comply with their obligations under the OPGGSA, including any decommissioning obligations, as part of NOPTA’s function of managing the transfer of titles under Part 4.3 of the OPGGSA.

The Commonwealth Government is currently assessing whether the existing regulatory framework is appropriate to manage future decommissioning activities, particularly in relation to the removal of offshore oil and gas infrastructure and pipelines. During 2018, the Department is expected to release a discussion paper as part of its review of the existing regulatory framework. This will provide stakeholders an opportunity to raise issues and suggest recommendations for reform to the Department and other regulators. We anticipate that any legislative reform will take some time following the Department’s review. It will, however, generate welcome debate on the Commonwealth’s decommissioning regime. Having said that it remains to be seen whether it will be sufficient impetus for the states and territories to review their respective decommissioning regimes.[14]